High accuracy, and extremely durable, these portable instruments are housed in durable and rugged cases designed to withstand shocks, vibration, and mishandling associated with factory and field-testing. 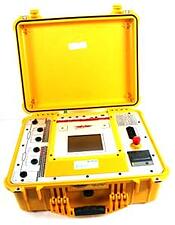 The Raytech TR-Spy family of TTRs have quickly become recognized as the World’s most advanced Three Phase Transformer Ratiometers. 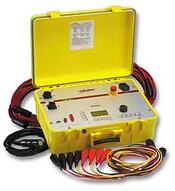 Measure Connections, Contacts and Control Circuits with the Raytech WR14

Prior to modern digital electronic equipment, the Kelvin Bridge was used to measure winding resistance. Batteries, switches, galvanometers, ammeters and slidewire adjustments were used to obtain resistance measurements. With modern microprocessor based test equipment testing times have been greatly reduced. Direct readings are available from digital meters with automatic indications telling when a good measurement is available.

Raytech WR50-12 for Precise Winding Resistance Measurements to 50 A 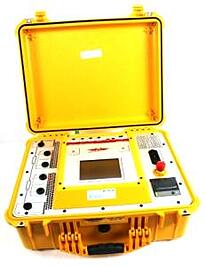 The Raytech WR50-12 Two Channel Winding Resistance Test Set measures the resistance of highest inductivities in the shortest amount of time with its innovative charge and discharge circuits.

Raytech WR50-12 Two Channel Winding Resistance Test Set is designed for a high degree of accuracy for the measurement of very low resistance of inductive loads.

An electronic device that measures electrical resistance, ohmmeters come with different levels of sensitivity; some are designed to measure low-resistance materials, while others measure higher resistance.

An ohmmeter functions by passing a constant current or voltage though an object, such as voltage from a battery, and then measuring the resulting current with an ammeter after it passes through the resistance. The higher resistance the material has, the less current will pass through it. An ohmmeter is typically not used to measure resistance across an entire circuit, but rather through different parts of the circuit, although it can be used to test that a circuit is not broken. Components of a circuit can be removed and tested individually for resistance.

The unique design approach of the engineering team at Raytech USA has resulted in the development of highly regarded measuring instruments which have set new standards in the electrical testing industry. 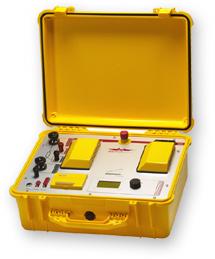 The Raytech Micro Centurion II features a pure filtered DC power supply to ensure that it only gives clean power with minimal ripple. The Micro-Ohm Meter has a current output of 200 Amperes which allows it to measure resistance accurately from 0.01 Ω up to 5 Ω. An automatic internal diagnostics and calibration system allows for accuracy every time. You can attach the Raytech Micro Centurion II to a computer using its Centronics port or through its RS232 serial port for remote diagnostics. With rugged construction that allows the Micro-Ohm Meter to tolerate drops as high as 1 meter without damage, this ductor is suitable for field and industrial use.