The Phenix Technologies 6CP100/50-10 AC Dielectric Test Set is a portable, rugged AC high voltage test set ideally suited for use in the field or in the laboratory. The 6CP100 offers a complete test system in a mobile package and utilizes a combination control and regulator enclosure and a separate high voltage section.

The system is equipped with advanced digital metering, and control and protection devices which are easy to use and provide all the necessary information to safely operate the system. 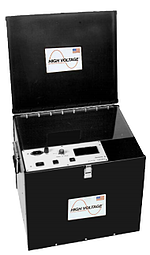 The High Voltage DTS-100D Oil Dielectric AC Test Set is an Oil/Liquid Dielectric AC tester that provides repeatable and accurate measurement of the breakdown voltage of insulating fluids used in transformers, circuit breakers, bushings, capacitors, etc. It is rugged, reliable, and designed with field use in mind. 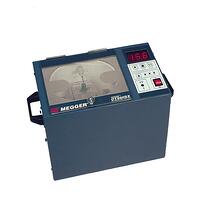 Insulating oil plays an important role in various electrical components like circuit breakers and transformers. Insulating oil servers as a dielectric and at the same time as a heatsink. It is important to keep the oil free from contaminants like moisture, acids, organic materials and carbon deposits. These contaminants are conductive and can cause stray currents to flow. This may result in short circuits and failure of the electrical component. To test for the purity of insulating oils, an oil test set is used. This device conducts a dielectric strength tests on a sample to determine if the oil is still within the safe operating limits. An oil test set passes an electrical current through the test sample. The voltage is slowly increased or held constant until the insulating oil reaches electrical breakdown.